How I spent International Women’s day with women in India 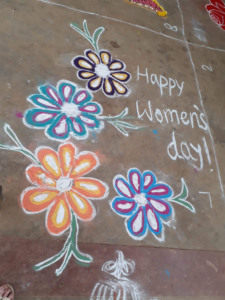 In March 2018 I was staying in Madurai in Tamil Nadu in Southern India. I went there as a volunteer in an orphanage and I was living with a family in Madurai for the duration of my stay. The family that I was staying with were high caste, all well educated and well travelled, and their daughter had attended university and was now working in Madurai as an architect. Most staff in the orphanage and people around Madurai that I met during my stay did not speak English, Tamil is their local language and Hindi is the national language. Many people in the rural areas would not even speak Hindi.

To celebrate International women’s day I was invited to go on a day trip to a farm with a local women’s group. The lady I was living with, Anitha, said that her mother had founded the group as it gave women from lower castes the opportunity to meet up and enjoy time together. Madurai is a very traditional town in as much as women tend to not socialise outside of their families.

Most women in Madurai wear saris and as a visitor I was expected to dress modestly, keeping my shoulders, legs and stomach covered. It is only acceptable to show your stomach if you are wearing a sari, as it is traditional dress.

The coach trip started as all coach trips do with a very excited group of women all talking over each other in Tamil. None of them spoke English and yet they were very welcoming of me.  The language of laughter and smiling is an international language. There were the early ones who got there long before we were due to set off and the latecomers who almost had to chase the coach as they turned up so late. As with all good coach trips music was played, there was a lot of talking and chatting and food was distributed around the coach.

The farm that we were going to is owned and run by Anitha’s family. We started with the women taking part in a rangoli making competition, the theme being International women’s day. They were all well prepared, they had brought coloured chalks, flower petals and anything else that they needed for their designs and every design was beautiful and colourful.  I saw a lot of rangolis during my wanders around Madurai at the entrance to  properties.  Anitha told me that it means that visitors are welcome.  Some were really intricate and all were colourful. 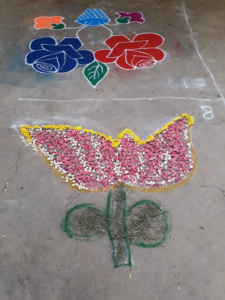 I don’t know who won unfortunately. It was so busy and loud that I forgot to ask and at the end when they handed out prizes it was really loud and everyone was chatting so I got totally lost with who had won what prize. 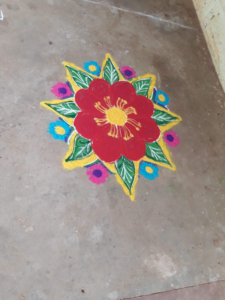 They then started the entertainment. Women had spent time at home making up games, quizzes and puzzles. They performed songs and comedy routines. It was really entertaining with a lot of laughter. It’s amazing how laughter is so infectious that even when I had no idea what was going on at times, I was thoroughly enjoying it all. Anitha told me that many of the ladies on the group had very little outlet for entertainment as they spent most of their time at home. They were definitely making the most of their day out.

By then it was lunchtime. The jackfruit on the farm are enormous, they picked some and along with other fresh vegetables from the farm a couple of the women started to cook. Women had made food to go with the jackfruit and brought drinks. We ate off banana leaves with our hands. 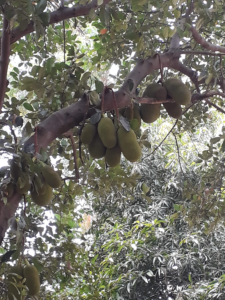 They then had the running races. It was over 90 degrees but there were quite a few races, with various winners. Definitely not the easiest way to run, in a sari with sandals on.  Once again there was a lot of laughter and some of the women were very competitive.

After that we sat in the shade of a barn. Someone picked coconuts and a farm worker sliced the top off. Eating fresh coconut in a barn in India cannot be compared to what we eat at home. I don’t usually like coconut but then again, I don’t have access to freshly picked coconuts when I am at home. Using the top of the coconut as a spoon for scooping the flesh out and then drinking the liquid was a great way to quench our thirst.

Then there was a prize giving ceremony where women won awards for their Rangoli designs, running and the competitions that had been held earlier in the day.  I was presented with a tiara, and told that it was because I  was their guest of honour. 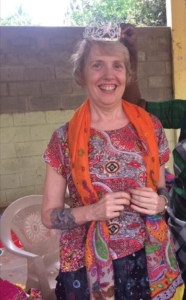 They then bought various fruits and vegetables from the farm and we all set off for home on the coach. This time we shared the coach with all the food and vegetables that the women were taking home. It was a lot quieter on the trip home than the trip out to the farm.

I feel lucky to have shared the day with these women and to have had the opportunity to celebrate International Women’s day with a group of women who welcomed me with open arms. Even though we had no common spoken language, we shared the language of laughter and smiles and although my life as a woman is very far removed from theirs, I definitely felt a part of their group on that day.

What does nature mean to you?